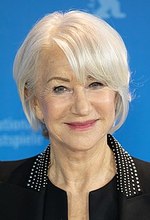 Dame Helen Lydia Mirren DBE (née Mironoff; born 26 July 1945) is an English actor. The recipient of numerous accolades, she is the only person to achieve the Triple Crown of Acting in both the US and the UK, winning an Academy Award and a British Academy Film Award for her portrayal of Queen Elizabeth II in The Queen, a Tony Award and a Laurence Olivier Award for the same role in The Audience, three British Academy Television Awards for her performance as DCI Jane Tennison in Prime Suspect, and four Primetime Emmy Awards, including two for Prime Suspect. More about Helen Mirren

Current items with a signature of Helen Mirren

These are the most current items with a signature of Helen Mirren that were listed on eBay and on other online stores - click here for more items.

Traded items with a signature of Helen Mirren

The most expensive item with a signature of Helen Mirren (Signed Script, Poster and Programme by Helen Mirren) was sold in June 2013 for £102.00 while the cheapest item (Genuine Hand Signed Helen Mirren And Coa Autograph) found a new owner for £0.99 in October 2021. The month with the most items sold (9) was September 2018 with an average selling price of £9.99 for an autographed item of Helen Mirren. Sold items reached their highest average selling price in June 2013 with £54.25 and the month that saw the lowest prices with £0.99 was October 2021. In average, an autographed item from Helen Mirren is worth £9.99.

Most recently, these items with a signature of Helen Mirren were sold on eBay - click here for more items.

Dame Helen Mirren would be up for a kiss with Vin Diesel in Fast and Furious 10 (06/29/21): ‘It is like hearing the most incredibly well-oiled engine.’

The 18 Sexiest Female TV Cops: From Helen Mirren To Sharon Gless, Did Your Favou (03/20/15): Scott and Bailey are the latest recruits in a fine tradition of female TV cops. Scott and Bailey are worthy collectors of the female TV cop baton Since they debuted on screen in 2011, the popular duo played by Lesley Sharp and Suranne Jones have been tasked with keeping the law, but their appeal lie

Screening of WOMAN IN GOLD starring Helen Mirren: 100 tickets to be won (03/20/15): WOMAN IN GOLD is the remarkable true story of one woman’s journey to reclaim her heritage and seek justice for what happened to her family.

Helen Mirren Shines In Woman In Gold (03/10/15): But is the film as well-made as its subject deserves it to be? Mirren plays Jewish octogenarian Maria Altmann, an Austrian Holocaust survivor living in Los Angeles.

Helen Mirren: I get louder cheers on Broadway for my queen (03/2015): Dame Helen Mirren says Broadway audiences are cheering her more as she plays the Queen than West End theatregoers did.

Dame Helen Mirren reveals her new ad campaign as she explains how she does it (01/2015): She's one of the most recognisable and well respected faces in the film industry and now she's representing L'Oreal too. The unretouched, candid shots have Dame Helen Mirren in the starring role.

Helen Mirren in talks for art drama The Golden Lady (12/2014): The actress is in line for the film from My Week with Marilyn 's Simon Curtis.

Woman in black: Dame Helen Mirren sports shades as she jets out of South Africa (09/2014): DAME Helen Mirren looked every inch the Hollywood star as she arrived at the airport in Cape Town.

Helen Mirren says couples are too quick to give up on their marriage (08/2014): The 69-year-old Oscar winner, who wed director Taylor Hackford in 1997, said that it has required a great deal of effort to remain together and provided her advice for marital harmony.

Fitness Truths: the pros and cons of Helen Mirren's 12-minute workout (07/2014): As Dame Helen Mirren reveals she has a 12-minute daily exercise routine to thank for her body, Jean-Clause Vacassin details the real benefits of the super speedy workout

Helen Mirren credited for 230 PER CENT surge in bikini sales in over 50s (06/2014): Retailers JD Williams has announced the remarkable year on year growth of the two-piece. Their costumer-base are women over 50.

Twiggy, Lulu, Helen Mirren and the beauty secrets of the older woman (05/2014): THEY are the eternal queens of glamour.

Budding actor shares Dame Helen Mirren's fears as he battles for drama school (03/2014): A BUDDING actor has echoed the fears of Dame Helen Mirren that only young people with rich parents will be able to afford to consider careers in acting.

Hate your wrinkles? How to look as magic as Helen Mirren (02/2014): At 68, Helen Mirren looks better than ever. To help you achieve her graceful look, here are Sarah Vine's ultimate products for women over 50.