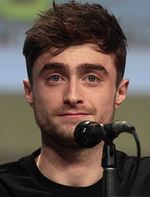 Daniel Jacob Radcliffe (born 23 July 1989) is an English actor, best known for playing Harry Potter in the Harry Potter film series. Born and raised in London, Radcliffe made his acting debut at age 10 in the BBC One television film David Copperfield (1999), followed by his feature film debut in The Tailor of Panama (2001). The same year, he starred in Harry Potter and the Philosopher's Stone. Over the subsequent ten years, he played the titular role in seven sequels, culminating with Harry Potter and the Deathly Hallows – Part 2 (2011). During this period, Radcliffe became one of the world's highest-paid actors, gained worldwide fame, popularity, and critical acclaim, and received many accolades for his performances in the series. More about Daniel Radcliffe

Current items with a signature of Daniel Radcliffe

These are the most current items with a signature of Daniel Radcliffe that were listed on eBay and on other online stores - click here for more items.

Traded items with a signature of Daniel Radcliffe

Most recently, these items with a signature of Daniel Radcliffe were sold on eBay - click here for more items.

Harry Potter: How old was Daniel Radcliffe when he made the first film and how o (11/17/21): We're starting to feel very, very old.

Daniel Radcliffe and Emma Watson to John Cleese and Alfred Enoch: Where are the (11/16/21): Feeling old?

Daniel Radcliffe reveals gruesome Harry Potter prop he kept from the second film (02/28/21): He also has a few pairs of Harry's glasses.

Who should follow in Hugh Grant’s footsteps as Paddington 3 villain? From Dame E (02/18/21): So many possibilities.

Daniel Radcliffe reveals a monkey ‘jerked off relentlessly’ on set of Harry Pott (12/2020):

Daniel Radcliffe to feature in GTA biopic flick. Well, it's work at least (04/2015): Wizard! You shall not pass … on the inside lane Former Harry Potter actor Daniel Radcliffe is reported to be in line to play the co-founder of Rockstar Games, publisher of the violence-fest Grand Theft Auto game series.…

Daniel Radcliffe Selling Off Australian Home (02/2015): The British actor is believed to have purchased the plush pad in 2004 while he was in the country filming his movie December Boys, and he has since used it as a base whenever he was visiting Down Under.

Daniel Radcliffe Impersonator Raps About Harry Potter's Life At Hogwarts (01/2015): After Daniel Radcliffe's incredible rendition of Alphabet Aerobics on The Tonight Show Starring Jimmy Fallon, Applecomedy decided to give it a bit more of a Hogwarts vibe. They didn't do quite as well as Daniel, but it's still pretty damn incredible. Watch the real Radcliffe rapping here:

Look Out, Daniel Radcliffe! This Rapping Reporter Warms Up By Spitting Some Seri (12/2014): Whether it's listening to a psych-up song or giving yourself a little pep talk, everyone has their own little ritual to help get their head in the game! Well for NewsWest9 reporter Kim Powell in Midland, Texas, that pregame ritual involves spitting some mad rhymes! Namely Alphabet Aerobics by Blacka

British teacher who bragged he taught Harry Potter star Daniel Radcliffe 'has fl (11/2014): Paul Meekin, 40, was principal of the Trio World School in Bangalore, India, and once reportedly told an Indian newspaper he had briefly taught the future Harry Potter star at a London school.

Daniel Radcliffe: 'I'm not good in Harry Potter and the Half-Blood Prince' (10/2014): What If star says he thought he delivered "one-note" performances in the Potter films.

Daniel Radcliffe Will Only Ever Date Actresses, Sorry Ladies! (08/2014): The Harry Potter star admitted that he wouldn’t date a non-actress as they wouldn’t be as understanding over the difficulty of being in a relationship with an actor.

Watch Girls' Adam Driver Mock Daniel Radcliffe About Love and Sex...Using Nachos (07/2014): Daniel Radcliffe's new film What If may be one of the sweetest movies we've seen this year, but it comes with plenty of drama. And only E! has an exclusive clip that shows...

Daniel Radcliffe cuddles up to Marisa Tomei on set in New York (06/2014): They are not the most likely of on-screen romantic couples.

Daniel Radcliffe & Adam Driver Team Up To Find Out What If Men & Women Can't Be (05/2014): Ah yes, the age old question. Can men and women really be just friends?? Maybe we'll let Daniel Radcliffe demonstrate it in his new film, What If! Starring with Adam Driver, the story follows the former Harry Potter star who hangs out with his friend's cousin, only to find himself falling for her an

Shenton's View: Brits lead charge on Tony Awards, but nothing for Daniel Radclif (04/2014): The annual race for Broadway’s most commercially important awards has begun in earnest, with the announcement of the nominations yesterday for this year’s Tony Awards. It saw an impressive showing for two imports from the…

Daniel Radcliffe returning to Broadway in The Cripple of Inishmaan (01/2014): Radcliffe previously starred in the show last year as a crippled orphan.

€64 million magic for Daniel Radcliffe (12/2013):   HARRY Potter star Daniel Radcliffe is celebrating a bumper Christmas after seeing his fortune jump by more than €7m. The company that manages his assets including all Potter-related earnings is now worth a spellbinding €64.6m. He said: “I got paid so well for doing the Harry Potter films, it’s rid

Daniel Radcliffe: 'No plan to distance myself from Harry Potter' (11/2013): He was the boy who brought Harry Potter to life – and feared he'd killed his own career in the process. Daniel Radcliffe talks about hairy legs, growing up in the spotlight, and why he never watches the films that made him famous Daniel Radcliffe says he has just been called a national treasure, and

Daniel Radcliffe Cast As Seb Coe In 'Gold' (10/2013): Daniel Radcliffe has been cast in the role of Seb Coe. He will star in Gold, a film which will focus on the competition between Lord Coe and Steve...

Daniel Radcliffe talks Horns (08/2013): In issue 211 of Total Film magazine - the cool issue - we bring you a plethora of incredible exclusives from the 10 coolest movies being made right now. We focus on the hippest movies heading your way - including David O Russell's American Hustle , Anchorman 2 and Joseph Gordon-Levitt's Don Jon - ta

Daniel Radcliffe: I never understand men who are threatened by intelligent women (06/2013): Daniel Radcliffe is rolling a pin-thin cigarette in whippet-slim fingers. We’ve been talking about his girlfriend Erin Darke, who at 28 is five years his senior, a formidably bright actress from New York, whom he met on the set of Kill Your Darlings. She’s not just “arm candy” by all accounts.