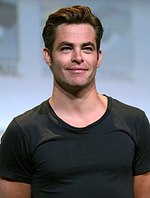 The most expensive item with a signature of Chris Pine (CHRIS PINE SIGNED STAR TREK PHOTO UACC REG 242) was sold on eBay in October 2018 for £33.99 while the cheapest item (A 10x8 photograph hand-signed by Chris Pine with COA) found a new owner for £0.99 in November 2019. The month with the most items sold (6) was October 2018 with an average selling price of £15.00 for an autographed item of Chris Pine. Sold items reached their highest average selling price in December 2014 with £29.99 and the month that saw the lowest prices with £0.99 was March 2019. In average, an autographed item from Chris Pine is worth £7.50.

Current items with a signature of Chris Pine

These are the most current items with a signature of Chris Pine that were listed on eBay and on other online stores - click here for more items.

Traded items with a signature of Chris Pine

Most recently, these items with a signature of Chris Pine were sold on eBay - click here for more items.

Chris Pine in talks for Comancheria (04/02/15): Chris Pine has entered into talks to star alongside Ben Foster in 'Comancheria' with Jeff Bridges also tipped for a role.

James Cordon Grills Chris Pine Over His Single Tear Moment At The Oscars! Plus A (03/25/15): It takes a really talented actor to be able to produce a single tear on command. Though for one really talented actor, all it took was one powerful song. While on The Late Late Show, new host James Corden brought up Chris Pine's single tear incident. If you're unfamiliar with the amazing moment, it

Jennifer Lopez suffers a stumble in her billowy blush gown after presenting an a (03/09/15): Jennifer Lopez was thrilled to be a presenter at this year's Academy Awards ceremony on Sunday, but that voluminous gown presented some technical difficulties of its own.

Leonard Nimoy's Famous Friends: See Spock With William Shatner, Chris Pine, Zach (03/09/15): As Spock would say, "I have been and always shall be your friend." Leonard Nimoy's role in Star Trek resonated with many, as nearly all of us can recognize the unforgettable...

Chris Pine And Zoë Kravitz Spark Dating Rumors By Attending A Pre-Oscar Party To (02/2015): Hold up, are these two in a relationship IRL?! We're pretty sure that's what a lot of people were thinking when they saw Chris Pine and Zoë Kravitz step out together over the weekend! This isn't the first time these two hotties have been spotted together! This past September, Chris and Zoë were seen

Sundance Quick Quote: Chris Pine on once playing 20 roles (01/2015): PARK CITY, Utah (AP) — "It's a good idea to put out there in the universe that you can do different and varied, kind of sort of things so people don't get tired of you, but I think experientially from the inside it's more fun to do different things, you know? And I got into acting because I think th

Chris Pine's Jack Ryan regret (12/2014): Chris Pine has admitted he ''deeply regrets'' not making 'Jack Ryan: Shadow Recruit' as successful as it could have been.

Emily Blunt & Chris Pine Struggled With Into The Woods Singing (11/2014): Emily Blunt and Chris Pine endured their own private hells while preparing to play leading roles in new movie musical Into The Woods because director Rob Marshall insisted on them hitting the high notes.

Chris Pine Gives The Best Performance Of His Career In Funny Or Die's Courtroom (10/2014): Chris Pine is really diving into his latest role! No, there's no surprise Star Trek sequel coming your way. The 34-year-old actor actually teamed up with Funny or Die to create Vampire Lawyer. It's an '80s courtroom parody where the humor comes more from the making of the video than from the footage

HAWT New Couple Alert? Chris Pine Spotted Leaving A Coldplay Concert With Zoe Kr (09/2014): Well, THIS is a pairing we weren't expecting!  We knew Zoe Kravitz had broken up with Penn Badgley and was then spotted with another new beau, but it seems like he didn't have the right stuff for her!  But Chris Pine apparently does!  The possible new pair were spotted leaving the Coldplay concert a

Sam Rockwell Replaces Chris Pine In Fool For Love Play (06/2014): Pine had been due to star opposite Six Feet Under actress Lauren Ambrose in the Sam Shepard play, but they both bowed out due to "scheduling difficulties".