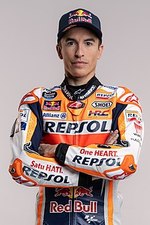 Marc Márquez Alentà (born 17 February 1993) is a Spanish Grand Prix motorcycle road racer and one of the most successful motorcycle racers of all time, with eight Grand Prix world championships to his name – six of which are in the premier MotoGP class. Márquez races for Honda's factory team since his MotoGP debut in 2013. He is nicknamed the 'Ant of Cervera' worldwide and 'el tro de Cervera' in his hometown, meaning the 'Thunder of Cervera'. He is one of four riders to have won world championship titles in three different categories, after Mike Hailwood, Phil Read and Valentino Rossi. Márquez is often considered one of the greatest innovators of modern MotoGP racing, due to his comparatively exaggerated cornering technique of leaning so far over the bike he seems to be “in constant danger of sliding out”. He is also the youngest ever champion in MotoGP history. More about Marc Marquez

Current items with a signature of Marc Marquez

These are the most current items with a signature of Marc Marquez that were listed on eBay and on other online stores - click here for more items.

Traded items with a signature of Marc Marquez

The most expensive item with a signature of Marc Marquez (Signed Marc Marquez Helmet Shoei X Spirit 3 & Used Visor - 2019 MotoGP) was sold in October 2019 for £2295.00 while the cheapest item (Genuine MotoGP Picture Hand Signed By Marc Márquez #93) found a new owner for £0.95 in . The month with the most items sold (28) was September 2019 with an average selling price of £44.99 for an autographed item of Marc Marquez. Sold items reached their highest average selling price in April 2019 with £1152.50 and the month that saw the lowest prices with £1.99 was February 2020. In average, an autographed item from Marc Marquez is worth £30.00.

Most recently, these items with a signature of Marc Marquez were sold on eBay - click here for more items.

Marc Marquez eases to victory at Americas GP (04/12/15): Marc Marquez made it three consecutive victories from pole at the Americas GP with a dominant performance in Texas.

WATCH: Marc Marquez previews CotA MotoGP (04/08/15): After a troubled start to the MotoGP season in Qatar, Marc Marquez and Repsol Honda turn their attentions to the United States MotoGP at CotA.

Marc Márquez is MotoGP maestro but Britons aim to make own mark on grid (03/25/15): The Spaniard is odds-on to secure a hat-trick of titles this season but Bradley Smith, Scott Redding and Cal Crutchlow are out to close the gap • More motor sport news How does one set about catching Marc Márquez? The utterly dominant star of MotoGP is an overwhelming favourite to make it a hat-tric

Marc Marquez wins record 13th race of the season as champion storms to victory i (11/2014): Champion Marc Marquez rounded off the 2014 MotoGP campaign in style with a record 13th victory of the year at the Valencia Grand Prix.

MotoGP: Marc Marquez clinches hard-fought victory at Silverstone (08/2014): Northern Ireland’s Michael Laverty missed out on a points finish at the British MotoGP at Silverstone on Sunday, which was won by world champion Marc Marquez.

MotoGP 2014 German GP: Marc Marquez Keeps Rewriting The History (07/2014): Every race is a new record for Marc Márquez. The Spanish world champion secured victory once again in the German Grand Prix to chalk up his ninth in a row.

MotoGP 2014: Unstoppable Marc Marquez Provides New Masterclass at Argentina Gran (04/2014): Marc Marquez has done it again. The world champion and Repsol Honda star claimed another victory at the Argentina Grand Prix in a race where, for the first time so far this season in any category, the stage finished in a Spanish 1-2-3 – with Dani Pedrosa

Marc Marquez wins Laureus Breakthrough Award (03/2014): “This is one of the most important awards I’ve received” - MotoGP champion Marc Marquez.

Marc Marquez won’t test at Qatar (02/2014): The next time injured reigning MotoGP champion Marc Marquez rides a MotoGP bike will be during opening practice for the season-opening Qatar Grand Prix.

Marc Marquez crowned world champion in Valencia (11/2013): Spain’s Marc Marquez became the youngest ever rider to win the MotoGP world title after riding a controlled race to third place at the season finale in Valencia.

POLL: Should Marc Marquez be penalised? (09/2013): There is much speculation over Race Direction’s yet-to-be-announced verdict on the Marc Marquez-Dani Pedrosa incident in Sunday’s Aragon MotoGP...

Marc Marquez takes MotoGP pole at Silverstone (08/2013): The 20-year-old Spanish sensation Marc Marquez (Honda) grabbed pole for today's MotoGP race with a lap in 2 minutes 0.691 seconds, just over one-tenth of a second faster than reigning champion Jorge Lorenzo (Yamaha). Britain's Creative Commons Attribution/Share-Alike License additional terms may apply. The picture by Box Repsol is licensed under the Creative Commons Attribution 2.0 Generic license.
Copyright 2010-2021 MemoFX LLC. All Rights Reserved. All trademarks, product names and logos appearing on the site are the property of their respective owners | Affiliate disclosure: When you click on links to various merchants on this site and make a purchase, this can result in this site earning a commission. Affiliate programs and affiliations include, but are not limited to, the eBay Partner Network. | Memorabilix in other countries: