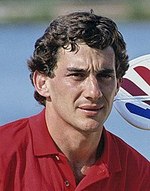 Ayrton Senna da Silva (Brazilian Portuguese:  (listen); 21 March 1960 – 1 May 1994) was a Brazilian racing driver who won the Formula One World Drivers' Championship in 1988, 1990 and 1991. Senna is one of three Formula One drivers from Brazil to win the World Championship and won 41 Grands Prix and 65 pole positions, with the latter being the record until 2006. He died in an accident leading the 1994 San Marino Grand Prix driving for the Williams team. More about Ayrton Senna

Current items with a signature of Ayrton Senna

These are the most current items with a signature of Ayrton Senna that were listed on eBay and on other online stores - click here for more items.

Traded items with a signature of Ayrton Senna

The most expensive item with a signature of Ayrton Senna (Ayrton Senna signed cap plus signed letter with COA and HQ display case) was sold in April 2020 for £2750.00 while the cheapest item (Ayrton Senna Lewis Hamilton Gold Coin F1 Signed Ferrari GP Monaco Old Car Sport) found a new owner for £0.01 in October 2020. The month with the most items sold (34) was June 2020 with an average selling price of £89.00 for an autographed item of Ayrton Senna. Sold items reached their highest average selling price in April 2019 with £698.28 and the month that saw the lowest prices with £3.00 was December 2017. In average, an autographed item from Ayrton Senna is worth £70.00.

Most recently, these items with a signature of Ayrton Senna were sold on eBay - click here for more items.

In the fast lane: Look inside the £7million former home of racing legend Ayrton (03/09/15): THE former home of ex-world champion F1 racing driver Ayrton Senna has gone on sale for nearly £7million.

F1 legend Ayrton Senna's luxury villa in Portugal goes on the market for €9.5mil (03/01/15): Formula One great Ayrton Senna's luxury villa in Portugal has been put up for sale. The three-time world champion, who was tragically killed in an accident while leading the 1994 San Marino Grand Prix, spent a large portion of his free time when racing in Europe.

Ayrton Senna themed content coming to Gran Turismo 6 this month (12/27/14): Today marks the 20th anniversary of the death of Ayrton Senna in the 1994 San Marino Grand Prix at Imola, a tragic event that also saw the Austrian driver Roland Ratzenberger lose his life, and throughout May Polyphony is marking the occasion with the 'Ayrton Senna Tribute', a series of updates for

Harry sets hearts racing as he test drives F1 simulator at Ayrton Senna Institut (06/2014): Harry jumped at the chance to get behind the wheel of one of the simulators as he toured the Ayrton Senna Insitute in São Paulo with the driver's sister Viviane.

Shields author pens book on F1 legend Ayrton Senna (05/2014): A SOUTH Tyneside author has raced to the top of the best-sellers list with a 20th anniversary tribute to Formula One icon Ayrton Senna.

Ayrton Senna Champion's Profile - Autocourse 1988 (04/2014): Crash.net is teaming up with the iconic Autocourse title to bring you a fascinating insight and retrospective into the sport you love....

Ex-Ayrton Senna Honda supercar to be auctioned (01/2014): A HONDA NSX supercar once owned by the legendary racing driver Ayrton Senna will be sure to attract a bidding frenzy from enthusiast collectors when it goes under the hammer next month.The 1992 mid-engined two seater was originally purchased by Antonio Braga, Senna's manager and a close personal fri

Hall of Fame No 6... Ayrton Senna: Master of the track who lived life on the edg (12/2013): JONATHAN McEVOY: When Ayrton Senna, 34 years old and still at the height of his fame and the peak of his talent, died on that melancholic afternoon at Imola, his countrymen in Brazil grieved on a scale never before engendered by a sportsman.