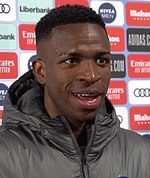 Vinícius José Paixão de Oliveira Júnior (born 12 July 2000), commonly known as Vinícius Júnior or Vini Jr. (Brazilian Portuguese: ), is a Brazilian professional footballer who plays as a winger for Spanish club Real Madrid and the Brazil national team. A skillful, fast, and strong player, he is often regarded as one of the best wingers in world football. More about Vinicius Júnior

Current items with a signature of Vinicius Júnior

These are the most current items with a signature of Vinicius Júnior that were listed on eBay and on other online stores - click here for more items.

Traded items with a signature of Vinicius Júnior

The most expensive item with a signature of Vinicius Júnior (VINICIUS JUNIOR AUTO SP /50 Topps Chrome Match Attax 2020-21 AUTOGRAPH SIGNED) was sold in April 2021 for £249.99 while the cheapest item (match attax 19/20 VINICIUS JUNIOR REAL MADRID SIGNED AUTOGRAPHED) found a new owner for £2.00 in April 2020. The month with the most items sold (4) was June 2020 with an average selling price of £10.49 for an autographed item of Vinicius Júnior. Sold items reached their highest average selling price in April 2021 with £134.75 and the month that saw the lowest prices with £2.00 was April 2020. In average, an autographed item from Vinicius Júnior is worth £19.50.

Most recently, these items with a signature of Vinicius Júnior were sold on eBay - click here for more items.

Real Madrid WEREN'T the best team in the Champions League this season, insists L (05/30/22): Los Blancos won their 14th European crown after Vinicius Junior scored the only goal in Saturday night's final against Liverpool at the Stade de France in Paris.

Real Madrid set to hand Vinicius Junior a lucrative new contract after Champions (05/30/22): SAMI MOKBEL: He scored the only goal to beat Liverpool on Saturday as he tapped home Federico Valverde's cross. It capped a breakthrough season for the Brazilian.

Vinicius Junior could help erase the memory of Kylian Mbappe for Real Madrid wit (05/26/22): PETE JENSON: Kylian Mbappe has rejected Real Madrid for a third time but the difference now is that Vinicius has finally arrived at the top table of world football and can fill void left by no-show Mbappe.

Manchester City: Unseen footage shows Pep Guardiola crumbling to the turf after (04/27/22): The stakes are high in Manchester City's Champions League semi-final with Real Madrid so it was no wonder Pep Guardiola cut a highly animated figure on the touchline on Tuesday.

Carlo Ancelotti reveals he tactically OUTWITTED Thomas Tuchel by playing Fede Va (04/2022): The Uruguay international was selected ahead of Rodrygo in the Madrid front three and helped along with hat-trick hero Karim Benzema and left-winger Vinicius Junior to create plenty of problems.

Real Sociedad 0-2 Real Madrid: Vinicius Junior and Luka Jovic goals sees Real go (12/2021): PETE JENSON: Vinicius scored his 10th goal of the season as Real Madrid extended their lead at the top of La Liga to eight points. It was a case of no Karim Benzema, no problem.

Real Madrid hope to build a front three of Vinicius Junior, Kylian Mbappe AND Er (11/2021): According to AS Madrid plan an attacking revamp, starting as soon as January when they aim to revive their failed summer chase of Kylian Mbappe from Paris Saint-Germain.

Elche 1-2 Real Madrid: Vinicius Junior at the double for Carlo Ancelotti's side (10/2021): PETE JENSON IN SPAIN: Vinicius destroyed Elche with two goals and he did it all without Karim Benzema who Carlo Ancelotti left resting back in Madrid.

Valencia 1-2 Real Madrid: Karim Benzema's off-the-shoulder winner keeps Carlo An (09/2021): Hugo Duro put Valencia ahead at the Mestalla before Vinicius Junior and Benzema's quickfire strikes in the space of two minutes saw Ancelotti's side turn the game on its head.

Levante 3-3 Real Madrid: Vinicius Junior rescues point in crazy LaLiga clash (08/2021): PETE JENSON IN SPAIN: Maybe Real Madrid should shelve the Kylian Mbappe obsession for a while, buy a defender and let Vinicius do their goalscoring following his heroics at Levante.

Real Madrid 1-0 Real Valladolid: Vinicius Junior's second-half strike seals win (09/2020): PETE JENSON IN SPAIN: The winger has struggled for goals over his last two seasons and so for all his youthful brilliance Zidane has overlooked him for big games including last season's Man City defeat.

Transfer news LIVE: Chelsea make ambitious swoop for Vinicius Junior (08/2020): Follow all of Tuesday's transfer news and updates as it happens with Sportsmail's DAN RIPLEY, including the very latest developments across the Premier League and in Europe.

PSG 'line up move to sign Vinicius Junior from Real Madrid... and hope Neymar w (07/2020): Paris Saint-Germain are reportedly plotting an audacious move for Real Madrid starlet Vinicius Junior, hoping his friendship with Neymar could help tempt him to join.