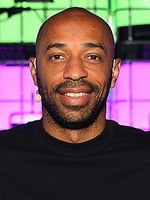 Thierry Daniel Henry (born 17 August 1977) is a French professional football coach and former player who is currently the manager of Major League Soccer club Montreal Impact. He is considered one of the greatest strikers of all time and has often been debated by pundits and journalists as the greatest player in the history of the Premier League. In 2003 and 2004, Henry was the runner-up for the FIFA World Player of the Year, and was runner-up for the Ballon d'Or in the former year. He was named the PFA Players' Player of the Year twice, the FWA Footballer of the Year three times, and was named in the PFA Team of the Year six-times in a row. He was also included in the FIFA FIFPro World XI once and the UEFA Team of the Year five times. Formerly a figurehead for Nike, he was one of the most commercially marketed footballers during the 2000s. More about Thierry Henry

The most expensive item with a signature of Thierry Henry (Thierry Henry Signed Memerabilia Set) was sold on eBay in October 2014 for £2027.00 while the cheapest item (Match ATTAX Signed Thierry Henry Club Badge Card Arsenal) found a new owner for £0.95 in January 2017. The month with the most items sold (56) was January 2015 with an average selling price of £6.49 for an autographed item of Thierry Henry. Sold items reached their highest average selling price in August 2016 with £299.00 and the month that saw the lowest prices with £0.95 was December 2016. In average, an autographed item from Thierry Henry is worth £16.00.

Current items with a signature of Thierry Henry

These are the most current items with a signature of Thierry Henry that were listed on eBay and on other online stores - click here for more items.

Traded items with a signature of Thierry Henry

Most recently, these items with a signature of Thierry Henry were sold on eBay - click here for more items.

Arsenal legend Thierry Henry worried Pierre-Emerick Aubameyang may have to leave (05/07/20): Henry admits that while he hopes the striker remains in north London, he cannot convince him to stay when he also left the Gunners to join Barcelona in 2007, where he went on to win the Champions League.

Thierry Henry reveals intensity of Invincibles is what drove 2004 Arsenal side o (05/07/20): Henry, who was top-scorer in 2003-04 with 30 Premier League goals, has opened up on The Football Show on Sky Sports about the manner in which training was approached during those glory years.

Arsenal legend Thierry Henry insists he WASN'T 'obsessed' with beating Van Niste (05/01/20): Henry and Van Nistelrooy were the most prolific strikers in England during the Arsenal and Manchester United rivalry of the early 2000's with each competing to be the division's top scorer.

Why Ruud van Nistelrooy v Thierry Henry was the greatest striker rivalry (04/29/20): CHRIS WHEELER: Look at Manchester United's toxic rivalry with Arsenal at the turn of the century and there was bad feeling to be found wherever these two clubs crossed paths. Up front it was unhealthy.

Arsenal legend Thierry Henry says he will want to manage them 'until the day I d (02/2020): The Gunners great played for the side between 1999 and 2007 and hit 228 goals in 376 appearances as he helped them to two Premier League titles before returning on loan in 2012.

Thierry Henry is desperate to make an Impact at Montreal... he reveals desire to (01/2020): EXCLUSIVE INTERVIEW BY CRAIG HOPE IN ORLANDO: The players of Montreal Impact tell us he still has that 'swagger'. And of course he does - he is Thierry Henry.

Thierry Henry 'emerges as surprise candidate to become next Barcelona manager' (12/2019): The former Barcelona forward took charge of MLS side Montreal Impact on an initial two-year deal in November. But Henry has now been linked to becoming boss at the Nou Camp.

Thierry Henry confident he can recover from nightmare Monaco spell to lead Montr (11/2019): The former Arsenal striker was handed his second opportunity in the hot seat with the MLS club despite his failings at his boyhood side in France, and penned a two-year contract.

Jamie Carragher admits fear of Thierry Henry 'tortured' him so much that a taxi (10/2019): Former Liverpool defender Carragher has openly admitted his toughest opponent was Henry - the pair regularly came up against each other between 1999 and 2007, and are now good friends.

Thierry Henry: I never thought Arsenal would feature in the top two amid "crazy (04/2015): Thierry Henry has admitted his surprise at Arsenal blazing a trail into the Premier League's top two. The Gunners maintained their winning streak after grinding out a 1-0 win at Burnley in yesterday's late kick-off.

Raheem Sterling can be a Liverpool great, says Thierry Henry (01/2015): Thierry Henry believes that Liverpool forward Raheem Sterling has all the attributes to become a future great. The Arsenal legend, who scored 175 goals for the Gunners in the Premier League wants the starlet to improve his finishing, which will make him an indomitable force in world football. The 20

Thierry Henry has given me endless advice, he is a true club legend, says Arsena (12/2014): Interview: Midfielder claims the new generation at Arsenal would welcome having legend back with the club on the training ground

Thierry Henry might have played last game of career (11/2014): Former Arsenal striker's contract due to run out, as New York Red Bulls miss out on MLS Cup

Kaka's the highest earner and Robbie Keane is paid more than Thierry Henry... ML (09/2014): Former AC Milan and Real Madrid midfielder Kaka has been revealed as the highest earning MLS player, despite never having played for his club.

MLS: Thierry Henry and Obafemi Martins light up high-scoring weekend (08/2014): DC stun Sporting, Seattle put four past Portland and Henry puts on a master class in a thrilling MLS programme Interview: Bradley Wright-Phillips You had to feel a little sorry for Callum Mallace and Andres Romero. In another game the formers exquisite

EDGE OF THE BOX: Thierry Henry says 'au revoir' to BBC... but accent on James Ro (06/2014): MARK WEBSTER: Saturday night, and it was light entertainment time, with the World Cup version of It’s A Knockout. This time around, it was the BBC’s chance to introduce the boys from Brazil as the opening act after ITV had the honours on the opening day.

Thierry Henry will not be re-signing for Arsenal, says Arsène Wenger (04/2014): • Former striker has been training with club to keep fit • Gunners take on Marseille in Champions League on Tuesday Manager Arsène Wenger has ruled out a move to bring former striker Thierry Henry back to Arsenal for a third spell, but will always welcome old players to the club's training complex.

Stoke City: Sacrébleu Mr Wenger! Thierry Henry's Rory... (02/2014): ARSENE Wenger acolyte Thierry Henry has been outed as a fan of the Rory Delap long throw. Ok, it is only on computer game Fifa 14, but Arsenal legend Henry makes it clear he has no hesitation in using a Delap howitzer to overpower the opposition. It's Thie

Arsenal announce bumper Puma kit deal and has Thierry Henry already got his hand (01/2014): Arsenal have announced a new long-term partnership with Puma which will see the company become the Barclays Premier League club's official kit suppliers from July 2014.

Video: Thierry Henry's strange referee dance (09/2013): Protesting against a referee's decision is a common sight in contemporary football, but Thierry Henry's reaction to such a call in a 1-0 victory over FC Dallas this week has left observers scratching their heads.

Player Watch: Is the 'next Thierry Henry' the next strike target... (08/2013): THERE is a one-minute-and-24-second YouTube clip which declares Bordeaux's Senegal international striker Henri Saivet is "the next Thierry Henry".So expectations can presumably be set pretty high for the latest front man to be linked with a move to Mark Hughe

Thierry Henry shows off New York themed tattoo (07/2013): A video showing the sleeve design, which covers the entirety of the Frenchman's left arm, was posted by Bang Bang Tattoos, a New York based tattoo parlour.

Classic YouTube | Lions in Australia, Thierry Henry's Arsenal assists and mean N (06/2013): This week's round-up also features a tenacious tennis trick-shot, a miraculous Muzzy Izzet goal and rapping sports stars 1) Ahead of the Lions' first Test against Australia, here is the entire first Test , the entire third Test and some highlights from the second one from the last time they toured t