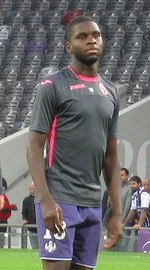 Current items with a signature of Odsonne Édouard

These are the most current items with a signature of Odsonne Édouard that were listed on eBay and on other online stores - click here for more items.

Traded items with a signature of Odsonne Édouard

The most expensive item with a signature of Odsonne Édouard (Odsonne Edouard Match Worn Signed Boots Celtic Fc Hail Hail Coa Bubble Framed) was sold in February 2021 for £410.00 while the cheapest item (Match Attax Spfl 2020-21 Odsonne Edouard Signed Autograph Card Celtic) found a new owner for £0.86 in May 2022. The month with the most items sold (4) was February 2021 with an average selling price of £285.00 for an autographed item of Odsonne Édouard. Sold items reached their highest average selling price in February 2021 with £285.00 and the month that saw the lowest prices with £1.32 was November 2020. In average, an autographed item from Odsonne Édouard is worth £36.00.

Most recently, these items with a signature of Odsonne Édouard were sold on eBay - click here for more items.

Crystal Palace chase Celtic for £20m-rated Odsonne Edouard before the transfer w (08/30/21): Palace lodged an offer worth up to £15million at the weekend, as reported by Sportsmail, and want to try to get a deal done before tomorrow's deadline for the striker, who has a year left on his contract.

Transfer news: Crystal Palace make £15m bid for Celtic striker Odsonne Edouard (08/28/21): The 23-year-old is interested in a move to Selhurst Park but Celtic have been holding out for a greater fee. Edouard only has one year left on deal yet Celtic owe a 40 per cent sell-on to PSG.

Celtic 3-2 Hearts: In-form Kyogo Furuhashi secures Scottish cup second round vic (08/15/21): Odsonne Edouard broke the deadlock by striking just before the half hour mark, before defender Stephen Welsh doubled the lead just minutes after in what would go on to be a five-goal affair.

Celtic: Odsonne Edouard prepared to leave on a free transfer next summer if he f (08/2021): The France under-21 international has entered the final year of his contract and wants to go. While English Premier League Brighton are keen, however, hopes of a quick deal have diminished.

Leicester 'set to beat Arsenal and Brighton to the signing of Odsonne Edouard fo (06/2021): Foxes manager Brendan Rodgers signed the forward for a club-record £8million fee in 2018. The Times report a reunion with Rodgers was a a crucial factor in persuading Edouard to move.

Arsenal 'hoping to convince Odsonne Edouard to join them instead of Leicester th (04/2021): The Frenchman, who has scored 81 goals in 163 appearances for the Scottish giants, has attracted interest from a number of clubs. The Foxes had looked to be leading the race.

Celtic closing in on Wigan teenager Kyle Joseph to replace Odsonne Edouard in ma (03/2021): The deposed Scottish champions are undertaking a summer rebuild and are looking to bring in around six new players, with 19-year-old Wigan striker Joseph seen as one for the future.

Celtic striker Odsonne Edouard tests POSITIVE for Covid-19 (10/2020): The French Football Federation confirmed a positive diagnosis for the Parkhead star in a statement on Tuesday night and he is now a major doubt to be involved against Rangers.

Everton enter race to sign Celtic striker Odsonne Edouard (03/2020): The France U21 star has been outstanding for Celtic during his two years in Scotland and they want to keep Edouard; they have already begun preliminary moves to offer a contract extension.