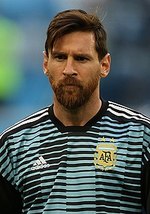 Lionel Andrés Messi Cuccittini (born 24 June 1987) is an Argentine professional footballer who plays as a forward and captains both Spanish club Barcelona and the Argentina national team. Often considered the best player in the world and widely regarded as one of the greatest players of all time, Messi has won a record six Ballon d'Or awards, and a record six European Golden Shoes. He has spent his entire professional career with Barcelona, where he has won a club-record 34 trophies, including ten La Liga titles, four UEFA Champions League titles and six Copas del Rey. A prolific goalscorer and a creative playmaker, Messi holds the records for most goals in La Liga (438), a La Liga and European league season (50), most hat-tricks in La Liga (36) and the UEFA Champions League (8), and most assists in La Liga (181) and the Copa América (12). He has scored over 700 senior career goals for club and country. More about Lionel Messi

The most expensive item with a signature of Lionel Messi (Lionel Messi Player Worn Nike Football Boots. Both Signed. 2004.... Rare) was sold on eBay in April 2020 for £2800.00 while the cheapest item (LIONEL MESSI BARCELONA autographed 6X4 photo signed 1) found a new owner for £0.01 in May 2020. The month with the most items sold (98) was May 2018 with an average selling price of £22.00 for an autographed item of Lionel Messi. Sold items reached their highest average selling price in September 2017 with £135.00 and the month that saw the lowest prices with £3.45 was October 2014. In average, an autographed item from Lionel Messi is worth £16.98.

Current items with a signature of Lionel Messi

These are the most current items with a signature of Lionel Messi that were listed on eBay and on other online stores - click here for more items.

Traded items with a signature of Lionel Messi

Most recently, these items with a signature of Lionel Messi were sold on eBay - click here for more items.

Inter Milan's sponsor Pirelli can 'help' in bid to sign Lionel Messi, says tyre (07/07/20): Marco Tronchetti said Pirelli could offer support in the quest to bring the Barcelona legend to Inter despite financial worries, but insisted club president Steven Zhang had to make a real push.

Lionel Messi stalling on new contract at Barcelona after a chaotic season at the (07/05/20): His current deal runs until 2021 when Bartomeu's term ends and Messi, who will be 34 next summer, is still likely to stay, signing with a new president.

Villareal 1-4 Barcelona: Luis Suarez SCREAMER and Antoine Griezmann chip keeps t (07/05/20): Finally it happened - 51 weeks after he signed for Barcelona, Antoine Griezmann linked up brilliantly with Lionel Messi for a very special goal. It was the third in a 4-1 win over Villarreal.

Riqui Puig has gone from besotted fan to Lionel Messi's Barcelona team-mate in f (07/05/20): PETE JENSON IN SPAIN: There is a photograph of the pair together from 2013. Messi in his pomp and Puig, just a 14-year-old fan, albeit one with a huge future.

Quique Setien relaxed over speculation on Lionel Messi's future amid claims he c (07/04/20): Barcelona legend Lionel Messi could leave for free when his current contract ends in July 2021 and has reportedly stalled talks about an extension to his deal - but Quique Setien says he is not worried.

Lionel Messi weighing up moves when his Barcelona contract expires, says Rivaldo (07/2020): With the Catalan giants in turmoil, Spanish radio station Cadena SER reported that Messi would see out his £500,000-per-week contract at the club before moving on in the summer of 2021.

Lionel Messi nearly signed for Getafe on loan from Barcelona as a youngster (05/2020): After Messi's first small steps at Barcelona, Getafe chief Angel Torres claims he had held discussions with then Barca sporing director Txiki Begiristain over signing the 17-year-old.

Samuel Eto'o reveals he offered a young Lionel Messi 'career-changing' advice (04/2020): The pair were team-mates for a number of seasons from Messi's breakthrough into the Barcelona first team during the 2004-05 season until Eto'o's departure for Inter Milan in 2009.

PETE JENSON: Lionel Messi will win his battle with the Barcelona board (03/2020): In these times of boredom let's play: 'Who's the bad guy?' That's what Barcelona seemed to have been up to this week with club captain Lionel Messi up against president Josep Bartomeu.

The top 50 young players in Europe (10-1): The kid ready to replace Lionel Messi (12/2019): AMITAI WINEHOUSE: Sportsmail has tasked itself with finding the top 50 players under the age of 23 across the continent and compiling a series of lists that ranks them against each other.

Barcelona's 'lethal trident' hailed as Messi and Griezmann link-up in Borussia D (11/2019): Lionel Messi and Antoine Griezmann could barely pass to each other in the early days of their partnership - but things finally began to click under the Champions League lights on Wednesday.

Granada vs Barcelona LIVE: LaLiga 2019-20 commentary, live stream, latest score, (09/2019): Lionel Messi could make his first start of the season when Barcelona line up against Granada on Saturday.

Lionel Messi made his Barcelona debut 15 years ago against Jose Mourinho's (11/2018): It was exactly 15 years ago and it was only 15 minutes, but football would never be the same again.

'Jon Walters takes better penalties than Lionel Messi' - Vincent... (02/2015): VINCENT Kompany has not been allowed to forget his suggestion that Stoke City could provide a tougher test than Barcelona.Barca showed their class as they beat Kompany's Manchester City side 2-0 in the Champions League on Tuesday night thanks to a brace from Luis Suarez.The people behind 4-4-2oons h

Lionel Messi and girlfriend Antonella Roccuzzo's Italian getaway takes them to P (07/2014): After a disappointing summer at the World Cup, he's making the most of the remainder of the season with his family.

Lionel Messi poses with a Corinthians shirt ahead of Switzerland clash (06/2014): Argentina take over Brazil’s famous Corinthians Stadium on Tuesday night and star striker Lionel Messi has set aside the national rivalry by posing with a shirt with the message ‘Welcome to the Arena Corinthians’.

Luis Suarez is the best in the world ahead of Lionel Messi and Cristiano Ronaldo (05/2014): PETE JENSON: Cristian Rodriguez says Uruguay will be without the finest player on the planet if Luis Suarez fails to recover from injury in time to play England.

Cristiano Ronaldo has finally proved he is No 1 and has blown Lionel Messi away (04/2014): RIATH AL-SAMARRAI: Cristiano Ronaldo is a superstar. He is also the best player in the world at this moment. Ronaldo, like one of his runs, continues to accelerate, while Messi has not captured the breath in quite the same manner this time round.

The gifs that keep on giving: Olympic rings, Lionel Messi and Edinson Cavani (03/2014): Featuring the opening ceremony in Sochi, how to tackle Barcelona and Christian Eriksen nutmegging a small child Thanks for all your suggestions on our last gifs blog . Four out of five ain't bad Edinson Ca

INTERVIEW Pt.2: Guillem Balague on his new book about Barcelona star Lionel Mess (02/2014): To send a link to this page to a friend, you must be logged in. In 2009 Messi signed a seven-year deal with Barcelona. Johan Cruyff was quoted as saying there was no motivation to improve as a player.

Tottenham would love to sign Lionel Messi, jokes Tim Sherwood as he rules out mo (01/2014): Tim Sherwood said today there is a "zero per cent" chance of Tottenham signing any new players before the transfer window shuts.

Lionel Messi to receive treatment in Argentina on troublesome thigh injury (11/2013): Lionel Messi has completed the first stage of his recovery from a thigh strain and will travel to his native Argentina on Friday as planned to continue treatment.

Champions League: Barcelona superstar Lionel Messi looking forward to return vis (08/2013): LAST season Messi and co were shocked by Celtic at Parkhead and got the fright of their lives at the Nou Camp - but the Argentine reckons this year's group is "beautiful".

Thierry Henry, Sergio Aguero and Edinson Cavani to team up for Lionel Messi foun (06/2013): Lionel Messi is assembling a vast squad of players from the Premier League and afar to take part in a trio of charity matches for his foundation. All proceeds from the fixtures will go directly to the foundation.