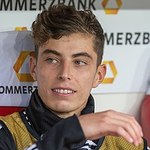 Kai Lukas Havertz (born 11 June 1999) is a German professional footballer who plays as an attacking midfielder or winger for Premier League club Chelsea and the Germany national team. More about Kai Havertz

Current items with a signature of Kai Havertz

These are the most current items with a signature of Kai Havertz that were listed on eBay and on other online stores - click here for more items.

Traded items with a signature of Kai Havertz

The most expensive item with a signature of Kai Havertz (Kai Havertz Signed Chelsea SHIRT LOOK AT THE AMAZING PROOF AFTAL COA) was sold in September 2020 for £295.00 while the cheapest item (match attax 19/20 KAI HAVERTZ BAYER LEVERKUSEN SIGNED AUTOGRAPHED 2) found a new owner for £0.99 in May 2020. The month with the most items sold (7) was April 2020 with an average selling price of £1.85 for an autographed item of Kai Havertz. Sold items reached their highest average selling price in September 2020 with £155.00 and the month that saw the lowest prices with £1.20 was October 2020. In average, an autographed item from Kai Havertz is worth £2.60.

Most recently, these items with a signature of Kai Havertz were sold on eBay - click here for more items.

Kai Havertz spreads Christmas cheer at Bayer Leverkusen as midfielder is hailed (12/26/20): Havertz showed he hasn't forgotten his roots by gifting each of his former team-mates a Chelsea shirt and thank you cards for their support during his time at the club.

Bayer Leverkusen star Leon Bailey to be scouted by Arsenal, Tottenham, Everton a (12/09/20): Leon Bailey has scored five goals and delivered six assists so far this season having moved into the playmaker slot following Kai Havertz's departure for Chelsea in the summer.

Kai Havertz reveals it was Chelsea's 'vision' which convinced him to make £89m m (11/11/20): Chelsea won the race for the highly-coveted Havertz this summer, and the Germany international says the scale of the Blues' project persuaded him to move to Stamford Bridge from Leverkusen.

Chelsea midfielder Kai Havertz ruled out of Rennes clash after testing positive (11/04/20): The Germany playmaker has started self-isolation. Chelsea returned a number of positive Covid tests after their short break between the end of last season and the start of the new term.

Timo Werner hails Chelsea team-mate Kai Havertz as one of 'the most talented pla (11/03/20): The German duo both completed big-money moves to Stamford Bridge earlier this summer and have been getting to grips to life in the Premier League and a new country.

Kai Havertz is the obvious contender to replace Jorginho as Chelsea's penalty ta (10/2020): The Blues boss could make Timo Werner his new spot-kick taker after the £53million summer signing rifled in his effort from 12 yards in their 4-0 win against Krasnodar in the Champions League.

PSG 'establish contact' with Chelsea over Jorginho loan move (09/2020): With the summer arrival of Kai Havertz, competition is high for a starting spot in the Blues midfield and the 28-year-old could be open to a move away from west London.

Kai Havertz has trained for the last time at Bayer Leverkusen, boss Peter Bosz c (08/2020): Chelsea have been handed a huge boost in their pursuit of Bayer Leverkusen star Kai Havertz after his manager confirmed he has had his final training session at the club.

Kai Havertz 'wants to secure move to Chelsea by next week' from Bayer Leverkusen (07/2020): Havertz is ready to move to the Blues who have already strengthened their squad next season with the exciting signings of striker Timo Werner and winger Hakim Ziyech.

Chelsea could save £20m on Kai Havertz if Bayer Leverkusen fail to qualify for t (06/2020): The Stamford Bridge side continued their business for the upcoming window on Thursday as they sealed the signature of Timo Werner from RB Leipzig, having already signed Hakim Ziyech.

Manchester United target Kai Havertz flirts over move away from Bayer Leveruksen (11/2019): Havertz announced himself in style in the Bundesliga last season, scoring 17 goals in 34 games for Leverkusen - which has led him to attracting interest from Europe's top clubs.