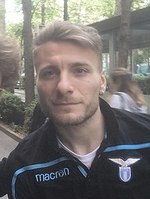 Ciro Immobile Cavaliere OMRI (born 20 February 1990) is an Italian professional footballer who plays as a striker for Serie A club Lazio and the Italy national team. More about Ciro Immobile

Current items with a signature of Ciro Immobile

These are the most current items with a signature of Ciro Immobile that were listed on eBay and on other online stores - click here for more items.

Traded items with a signature of Ciro Immobile

The most expensive item with a signature of Ciro Immobile (CIRO IMMOBILE SIGNED ITALY FOOTBALL SHIRT 2015+PHOTO PROOF*IMMOBILE HOLD SHIRT*) was sold in February 2015 for £119.99 while the cheapest item (Ciro Immobile Lazio Italy Signed Photo Football) found a new owner for £0.99 in October 2019. The month with the most items sold (2) was May 2020 with an average selling price of £2.02 for an autographed item of Ciro Immobile. Sold items reached their highest average selling price in February 2015 with £119.99 and the month that saw the lowest prices with £0.99 was February 2018. In average, an autographed item from Ciro Immobile is worth £4.95.

Most recently, these items with a signature of Ciro Immobile were sold on eBay - click here for more items.

Ciro Immobile dedicates Italy's superb start at Euro 2020 to two children shot d (06/17/21): The boys, identified as David and Daniel, were playing in Ardea, when they were shot dead by a man named locally as 35-year-old Andrea Pignani before he reportedly took his own life.

Euro 2020: Ciro Immobile is yet to score for Italy at a major tournament... now (06/10/21): TOM COLLOMOSSE: While his record of 13 goals in 46 appearances is not disastrous, a closer look at the numbers produces a more worrying picture. He has not scored in a major tournament.

Lewandowski leads the way in the Golden Shoe race - but who is the surprise name (04/02/21): The final stretch of the season will see the biggest names in the game fight it out for the right to be crowned the winner of the European Golden Shoe, which last season was claimed by Ciro Immobile.

Ciro Immobile 'on the verge of signing bumper new five-year deal' with Lazio (08/2020): Ciro Immobile enjoyed a sensational 2019-20 campaign for the Biancocelesti, scoring 39 goals and providing eight assists from 44 outings, earning him the European Golden Shoe.

Lazio end 13-year wait for Champions League football after defeating Cagliari in (07/2020): Serie A leading scorer Ciro Immobile netted the winner with his 31st goal of the season as Lazio, fourth with 72 points, clinched the final Italian place in Europe's elite club competition next season.