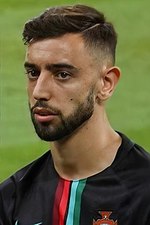 Current items with a signature of Bruno Fernandes

These are the most current items with a signature of Bruno Fernandes that were listed on eBay and on other online stores - click here for more items.

Traded items with a signature of Bruno Fernandes

Most recently, these items with a signature of Bruno Fernandes were sold on eBay - click here for more items.

Bruno Fernandes says Manchester United 'have to learn' from their mistakes after (10/03/21): United won four of their first five Premier League matches but last weekend's shock 1-0 home loss to Aston Villa was followed by Saturday's frustrating 1-1 draw with Everton.

Bruno Fernandes apologises for stoppage-time penalty miss against Aston Villa (09/26/21): Manchester United were awarded an injury-time penalty after Kourtney Hause handled the ball in the box during their 1-0 loss to Villa. However, Fernandes blasted the ball high into the stands.

Bruno Fernandes sends message to Jesse Lingard after his late winner against Wes (09/19/21): Lingard had been under intense scrutiny and received severe criticism for his horror back-pass that led to United's 2-1 defeat against Young Boys in their Champions League opener on Tuesday.

RICHARD TANNER: The script couldn't have been written any better for Ronaldo's M (09/11/21): RICHARD TANNER: Two goals from Ronaldo, a screamer from his Portuguese pal Bruno Fernandes and a late one from Jesse Lingard sent the Old Trafford crowd in ecstasy.

Fans invade pitch and take selfies with Manchester United star Bruno Fernandes d (09/2021): The World Cup qualifier was held up for a few minutes on Tuesday night as the youngsters took turns to pose for a photo with the midfielder. One fan then grabbed a photo with the referee.

Manchester United players in high spirits as they head out for a light-hearted l (08/2021): Bruno Fernandes and David de Gea were pictured enjoying each other's company, with the playmaker even reduced into fits of laughter, after the superstars dined in style at Cibo Restaurant.

Euro 2020: Roy Keane NOT surprised to see Portugal drop Bruno Fernandes for Belg (06/2021): Fernandes has struggled to replicate his Old Trafford form for his country at the tournament, and has been so overshadowed by other team-mates that he has gone from being a first-team player to a substitute.

Bruno Fernandes seen venting his frustration at referees at half-time in Europa (05/2021): Portugal international Fernandes was visibly angrier than most having emerged from the dressing room following Norwegian boss' team talk and showed his frustration at the referees.

Is Man United star Bruno Fernandes exhausted after run of just two goals in 14 g (04/2021): Fernandes has been the saviour of Solskjaer's tenure, the talismanic presence that has inspired United out of the ordinary and the bedrock of their notable improvement as a team this season.

Bruno Fernandes auctions off his shirt and boots from City win to raise funds fo (03/2021): The United midfielder is hoping to make a significant contribution towards the Portuguese youngsters' treatment at a US hospital, which is set to cost their family over a million dollars.

Chelsea boss Thomas Tuchel wanted to bring 'unbelievable' Bruno Fernandes to PSG (02/2021): Fernandes has had a transformative effect on United since they bought him from Sporting Lisbon for £47million last January and Tuchel's Chelsea must keep him quiet on Sunday afternoon.

How Bruno Fernandes has transformed Manchester United into Premier League title (12/2020): Fernandes has helped Solskjaer's team look like genuine title challengers for the first time in several years and the stats lay bare just how important he has become.

Bruno Fernandes admits Manchester United have not made a good start to the new s (10/2020): Fernandes will lead United for the first time in Parc des Princes on Tuesday night as Solskjaer's side kick off their Champions League campaign against last season's beaten finalists PSG.

Only Messi and Ronaldo have been involved in more goals than Bruno Fernandes sin (07/2020): The Portuguese midfielder has been a huge hit at Old Trafford after joining from Sporting Lisbon for an initial fee of £46.6million in a deal that could rise to £68million.

Should Bruno Fernandes' first strike against Brighton have stood? Replays show b (06/2020): The red-hot playmaker extended his impressive form for the Champions League chasers, but his first strike has been greeted with frustration after a glaring error from the match officials.

Man United star Bruno Fernandes 'has got FASTER during lockdown' (05/2020): Bruno Fernandes has already made an instant impression in the Premier League after winning February's Player of the Month award in his first few weeks in England.

Man United star Fred vows to chip in with goals thanks to Bruno Fernandes' impac (04/2020): Fred has managed netted three times in his two seasons at Old Trafford and but is confident he will become more clinical with the help of his new team-mate.