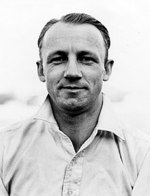 Sir Donald George Bradman, AC (27 August 1908 – 25 February 2001), nicknamed "The Don", was an Australian international cricketer, widely acknowledged as the greatest batsman of all time. Bradman's career Test batting average of 99.94 has been cited as the greatest achievement by any sportsman in any major sport. More about Don Bradman

Current items with a signature of Don Bradman

These are the most current items with a signature of Don Bradman that were listed on eBay and on other online stores - click here for more items.

Traded items with a signature of Don Bradman

The most expensive item with a signature of Don Bradman (1938 England v Australia signed cricket bat - signed by both teams Don Bradman) was sold in March 2016 for £650.00 while the cheapest item (Signed Neil Dansie South Australia Don Bradman Todmorden Lancashire 1940s 1950s) found a new owner for £0.99 in May 2018. The month with the most items sold (16) was March 2021 with an average selling price of £25.99 for an autographed item of Don Bradman. Sold items reached their highest average selling price in April 2015 with £181.51 and the month that saw the lowest prices with £0.99 was October 2015. In average, an autographed item from Don Bradman is worth £26.00.

Most recently, these items with a signature of Don Bradman were sold on eBay - click here for more items.

'Don Bradman Cricket has closed the gap between cricket games and the FIFAs of t (02/27/15): F ootball video games may generate all of the record-breaking statistics and headlines, but another of England’s national pastimes has consistently attracted players to its latest virtualised offerings. While they might not rack up the sales figures of FIFA or PES, cricket games have built up a dedi

Don Bradman Cricket bowling onto PS4 and Xbox One in February (12/17/14): Having arrived on PC in June, Don Bradman Cricket is to try its hand at a next-gen console release. Publisher HES says it will release Big Ant Studios’ title on PS4 and Xbox One in February of next year. The game, which licenses the name of the famed Aussie batsman, offers a career mode, detailed ba

Don Bradman's last hurrah in Britain is still the pride of Aberdeen (05/06/14): Memories of the Don's century at the end of the 1948 'Invincibles' tour still shine brightly in Scotland's northern cricket hotbed, where England play on Friday

Dafabet World Snooker Championship: Neil Robertson takes aim at Don Bradman's ma (04/17/14): Neil Robertson has his sights set on emulating arguably Australia’s greatest sportsman, but not in the way you might think.

Don Bradman Cricket 14 gets console release date (02/2014): Don Bradman Cricket 14 will release at the end of March for Xbox 360 and PS3, developer Big Ant Studios has announced. No specific date has been announced but the March releases is designed to coincide with the ICC World Twenty20 championship, which takes place in Bangladesh between 16 th  March and

Don Bradman Cricket delayed to 2014 (12/2013): There will no longer be any cricket games released to celebrate England’s upcoming triumph in this winter’s Ashes. Oh wait… In much the same manner as England’s batting order have capitulated under the glare of Mitchell Johnson, the hopes and expectations of cricket fans have crumbled as a second cr