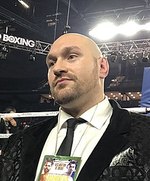 Tyson Luke Fury (born 12 August 1988) is a British professional boxer. He is a two-time heavyweight world champion, having held the WBC, The Ring magazine and lineal titles since defeating Deontay Wilder in February 2020; previously he held the unified WBA (Super), IBF, WBO, IBO, The Ring, and lineal titles after defeating Wladimir Klitschko in 2015. With his defeat of Wilder, Fury became the third heavyweight, after Floyd Patterson and Muhammad Ali, to hold The Ring magazine title twice, and the first heavyweight in history to have held the WBA (Super), WBC, IBF, WBO, and The Ring magazine titles. As of April 2020, he is ranked as the world's best active heavyweight by ESPN, the Transnational Boxing Rankings Board (TBRB), and BoxRec, as well as the second-best active boxer, pound for pound, by BoxRec, sixth by the TBRB, and seventh by ESPN. More about Tyson Fury

The most expensive item with a signature of Tyson Fury (Tyson fury signed glove light box) was sold on eBay in April 2019 for £920.00 while the cheapest item (Tyson Fury Boxing Signed Photo) found a new owner for £0.99 in September 2020. The month with the most items sold (117) was December 2019 with an average selling price of £26.99 for an autographed item of Tyson Fury. Sold items reached their highest average selling price in September 2018 with £70.50 and the month that saw the lowest prices with £1.49 was December 2017. In average, an autographed item from Tyson Fury is worth £36.00.

Current items with a signature of Tyson Fury

These are the most current items with a signature of Tyson Fury that were listed on eBay and on other online stores - click here for more items.

Traded items with a signature of Tyson Fury

Most recently, these items with a signature of Tyson Fury were sold on eBay - click here for more items.

Anthony Joshua WOULD relinquish WBO belt in order to fight Tyson Fury next year, (09/24/20): AJ is currently next scheduled to face mandatory challenger Kubrat Pulev later this year, but may then have to fight Oleksandr Usyk before a clash with Fury.

Anthony Joshua vs. Tyson Fury: Eddie Hearn confirms he is 'on the verge' of send (09/18/20): Earlier this year, the pair agreed terms in principle that would see them meet in an all-British clash where the heavyweight division would be unified with both men putting their belts on the line.

Dillian Whyte vows to knockout Alexander Povetkin as their rematch is confirmed (09/15/20): The Brit was knocked out cold by Povetkin in a shock defeat last month and subsequently surrendered his place as the No 1 mandatory challenger to Tyson Fury's WBC world title.

Kubrat Pulev's promoter threatens Anthony Joshua with legal action if he skip bo (09/10/20): First Joshua must face his IBF mandatory challenger Pulev, although it has been reported that the Watford-born star could skip past the fight and go straight into a mega bout with Fury.

Anthony Joshua says Tyson Fury 'should be looking to retire soon' as he goads Gy (09/08/20): The pair are hoping to clash in a highly-anticipated mega-fight next year that would see the winner crowed as undisputed champion, with both fighters holding all five belts.

Tyson Fury 'sent crashing to the canvas' by younger brother Tommy (09/2020): It is not often Tyson Fury finds himself flat on the canvas but that's what happened when he and brother Tommy met in the ring. Tyson is preparing to defend his heavyweight title in December.

'You big dosser!': Tyson Fury goads 'pal' Deontay Wilder with 'a special message (08/2020): The 'Gypsy King', who holds the WBC heavyweight belt, filmed himself repeating the phrase 'You Big Dosser!' as he awaits his trilogy fight with the American.

Anthony Joshua and Tyson Fury told each other 'make sure you win your next fight (07/2020): The arch rivals bumped into each other in Marbella, Spain, over the weekend in a chance meeting between the pair as they both took time to relax ahead of their training camps.

Tyson Fury hits back at Deontay Wilder's brother over glove conspiracy theory (06/2020): The Gypsy King has hit back after Wilder's brother, Marsellos, who fights in the cruiserweight division, made the accusations in a long Instagram post and vowed to end the Bronze Bomber's career.

Tyson Fury wants to face Anthony Joshua and warns rival not to lose to Kubrat Pu (05/2020): Fury holds the WBC belt, while AJ is the WBO, WBA and IBF champion, meaning the victor of a bout between the pair would be crowned unified, undisputed world champion.

Tyson Fury vs Anthony Joshua could be pushed forward, claims Bob Arum (04/2020): The Gypsy King was due to face Deontay Wilder for the third time this summer, but that showdown is now unlikely to take place until November or December.

Frank Warren says coronavirus outbreak means Tyson Fury won't fight Anthony Josh (03/2020): The promoters were hopeful that the much-anticipated 'Battle of Britain' showdown would be held in December, but the health emergency has disrupted the sporting world's calendar.

Deontay Wilder shares intense 90-second address after Tyson Fury defeat (02/2020): The Bronze Bomber was battered from pillar to post during a seven round onslaught before his trainer Mark Breland threw in the towel to hand Tyson Fury a famous win in Sin City.

Deontay Wilder questions Tyson Fury's KO tactics and claims Gypsy King has 'pill (01/2020): Deontay Wilder is unconvinced that Tyson Fury can live up to his words and knock him out in their blockbuster rematch next month, claiming that he has 'pillows as fists'.

Tyson Fury says Anthony Joshua will RETIRE if he is stopped by Andy Ruiz Jr agai (11/2019): The world of boxing was stunned as superstar Joshua was sent to the canvas four times before being stopped in the seventh round at Madison Square Garden, despite being a huge favourite.

Tyson Fury rubbishes claims by Eddie Hearn that he is quitting boxing to focus o (10/2019): Estimates suggest Fury will bank close to £12million from his WWE commitments but when quizzed on Hearn's claims that his new project means he is quitting boxing, Fury did not react kindly.

Watch boxer Tyson Fury shake off hard man image to wish Liverpool boy well after (03/2015): The video shows Fury at his gym as he is filmed wishing Liverpool lad Tommy a full recovery after his operation

Tyson Fury faces Christian Hammer ahead of world title shot against Wladimir Kli (12/2014): British and European heavyweight champion insists he can maintain his unbeaten record throughout his career

Tyson Fury and Billy Joe Saunders give Travellers’ fanbase cause to dream (11/2014): The pair’s victories on Saturday evening have put them close to glory and both can look forward to nights of drama next year • Fury wins on split decision, Saunders outclasses Chisora The fighting men of the Travelling community (of whom there are plenty) have long prided themselves on their courage

Tyson Fury is back on form on Twitter but a fight against Anthony Joshua won't h (10/2014): It's great news for us that the leading domestic heavyweights such as Tyson Fury are realising that Anthony Joshua is the 'money' in the division.

Video: Watch boxer Tyson Fury's silent protest during big fight press conference (09/2014): THE big-mouthed heavyweight, who usually enjoys his moment in the limelight, taped his mouth shut in protest against a Boxing Board of Control fine.

British Heavyweights Tyson Fury and Dereck Chisora to Meet on 22 November (08/2014): The heavyweight clash between Tyson Fury and Dereck Chisora has been rescheduled for 22 November at London's ExCel Arena. The pair were originally scheduled to meet on 26 July in Manchester but Chisora withdrew from the contest after suffering a fractured hand in his final sparring session a week be

Tyson Fury bout with Dereck Chisora set to be rescheduled for this autumn (07/2014): JEFF POWELL: Tyson Fury’s on-off grudge match with Dereck Chisora will be rescheduled for this autumn even though the giant Mancunian’s initial reaction to Saturday’s chaotic postponement was to wash his fists of the London rival he has defeated once already. Fury’s frustration with Chisora’s breaki

Liam Smith to defend British title against Navid Mansoori on Tyson Fury vs Derec (04/2014): Liam Smith will defend his British light-middleweight title on the undercard of Dereck Chisora's clash with Tyson Fury on Saturday, July 26 in Manchester.