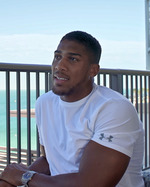 Anthony Oluwafemi Olaseni Joshua, OBE (born 15 October 1989) is a British professional boxer who is a two-time unified heavyweight champion, having held the WBA (Super), IBF, WBO, and IBO titles since December 2019 and previously between 2016 and June 2019. At regional level, he held the British and Commonwealth heavyweight titles from 2014 to 2016. More about Anthony Joshua

Current items with a signature of Anthony Joshua

These are the most current items with a signature of Anthony Joshua that were listed on eBay and on other online stores - click here for more items.

Traded items with a signature of Anthony Joshua

Most recently, these items with a signature of Anthony Joshua were sold on eBay - click here for more items.

Michael Hunter opens up on his dad's death, getting mistaken for Anthony Joshua (06/20/20): EXCLUSIVE INTERVIEW BY JORDAN SEWARD: Hunter is not used to speaking about this outside his family circles but is on the other end of the phone as he feels compelled to talk now.

Eddie Hearn planning to stage Anthony Joshua vs Kubrat Pulev fight in front of a (05/28/20): Joshua's fight with Kubrat Pulev at the Tottenham Hotspur Stadium, which was set to take place in June, was cancelled due to the on-going coronavirus pandemic.

Eddie Hearn says Anthony Joshua is desperate to be part of his Essex Fight Camp (05/19/20): The boxing promoter exclusively told Sportsmail of his intention to stage fight nights on four consecutive Saturdays in the 15-acre grounds of his Matchroom headquarters in Brentwood, Essex.

Dillian Whyte hits out at Anthony Joshua for 'fake excuses' and 'fooling the pub (05/2020): Whyte, who lost to Joshua in 2015 having previously beaten him at amateur level, has revealed he thinks the prospect on the table of the two Brits colliding again was a publicity ploy by Joshua.

Anthony Joshua could fight Andy Ruiz for THIRD time as Eddie Hearn teases trilog (03/2020): Joshua took Ruiz apart in their December rematch to round off a dominant points victory and become a two-time world champion in Saudi Arabia - avenging his shocking loss to the Mexican.

Anthony Joshua lives out teenage dream and performs alongside So Solid Crew (02/2020): The British heavyweight, who will take on Kubrat Pulev next in London, was filmed at Garage Nation - and impressed the capacity crowd by rapping along to the former UK No 1.

Eddie Hearn says Anthony Joshua's next fight could be at the Tottenham Hotspur S (01/2020): Anthony Joshua's defence of his world heavyweight titles will 'almost certainly' be in the UK against Kubrat Pulev, according to boxing promoter Eddie Hearn.

Anthony Joshua tells fans to get 'Undisputed' trending as he looks to fight Deon (12/2019): Anthony Joshua (left) is planning a big year of heavyweight boxing and took to Twitter to ask fans to help set up an undisputed heavyweight bout with Deontay Wilder (right) in 2020.

How Anthony Joshua and Eddie Hearn were swayed by £83m Saudi Arabia bid (11/2019): Money talks in the world of boxing and so it should have come as no surprise when the biggest heavyweight fight in recent memory, Joshua-Ruiz II, was sold to the highest bidder back in August.