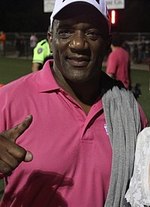 Billy Ray Sims (born September 18, 1955) is a former American college and professional football player who was a running back in the National Football League (NFL) for five seasons during the 1980s. Sims played college football for the University of Oklahoma, where he was a two-time consensus All-American, and won the Heisman Trophy in 1978. He was the first overall pick in the 1980 NFL Draft, and played professionally for the NFL's Detroit Lions. Sims was the last Oklahoma player taken Number 1 overall in the NFL Draft until quarterback Sam Bradford was taken first in the 2010 NFL Draft. He was given the nickname "Kung Fu Billy Sims" by ESPN's Chris Berman, after a game where the Detroit Lions played the Houston Oilers. In the NFL Films highlight, rather than be tackled during a rushing attempt, Sims ran at, jumped, and, while fully airborne, kicked Oilers Cornerback Steve Brown in the head. More about Billy Sims

Current items with a signature of Billy Sims

These are the most current items with a signature of Billy Sims that were listed on eBay and on other online stores - click here for more items.

Traded items with a signature of Billy Sims

The most expensive item with a signature of Billy Sims (Tom Matte Billy Sims 2 Signed Sports Illustrated Mags No Label Autograph JSA) was sold in March 2022 for £161.90 while the cheapest item (BILLY SIMS DETROIT LIONS INSCRIPTION #20 1st PICK '80 ROY 8 x 10 PHOTO AUTOGRAPH) found a new owner for £1.01 in October 2021. The month with the most items sold (7) was September 2021 with an average selling price of £24.91 for an autographed item of Billy Sims. Sold items reached their highest average selling price in March 2022 with £95.92 and the month that saw the lowest prices with £1.62 was August 2021. In average, an autographed item from Billy Sims is worth £20.20.

Most recently, these items with a signature of Billy Sims were sold on eBay - click here for more items.